My week of little sleep

This last week has been crazy and fun and exhausting! I got less sleep this week than any other week I've been here. Sure, I've had a night or two with little or no sleep but never a good eight nights!

Sunday:
AT about 5pm Diego's first host came and told me we leave in 5min. So I grab my bag and go. We first go to a sushi buffet because Diego really wanted sushi! Then we went to a cowboy themed fair! It was super fun! We ate junk food, saw motorcycles and a pickup drive on a wall (video on Facebook), and bought cowboy hats and shirt! So fun! But we got home at 2am and had school in the morning!
Monday:
Well four hours of sleep made it rather difficult to stay awake in class but I made it through the day. Then around 7pm, Diego's first host asked if we wanted to go get pizza. Of course! What teenager doesn't want pizza! So we go to Saraburi to get pizza and do some shopping. And once again we get back super late! Then for some reason I can't recall, I needed to Skype with my parents so I went to sleep around 2am again!
Tuesday:
I was running on nothing but caffeine! Coffee, coffee, coffee until I could get to my room to take a nap! But I had to stay up super late again! This time was unexpected but I needed to make a call to the SAT people to resolve an issue with my test sign up. But to make this call I had to wait until 11:30am PST or 2:30am my time! It took a half hour to talk with them and I'm not sure I was totally coherent. I finally went to sleep at 3am!
Wednesday:
I seriously considered skipping school but didn't because Wednesday is my favorite day.  But I ended up fell asleep in most my classes. You'd think it would be time for a break but that night Diego and I, along with another student, Anna, went to Bangkok for a goodbye dinner for Reily. She left yesterday morning :( But we didn't get to Bangkok until about 9pm then had dinner and hangout together! We ended up getting home around 3am. Another night with little sleep!
Thursday:

I didn't go to school because I was going to Bangkok to see my Grandma and her boyfriend. It was great to see her and talk all day! We went shopping in Siam Square, saw Erawan Shrine, and I had them try a ton of thai snacks! After they left I went with three of my exchange friends for massages and real talian pizza! It was totally what I needed! Then Anna and I went to spend the night at Reily's house. Of course, when you put three teen girls in one room, you don't get a ton of sleep and we had to get up early to go to the BTS. It was totally with it though!


Friday:
Though I had to get up early so I could get home, I was able to sleep nice and early that night! Finally!
Saturday: 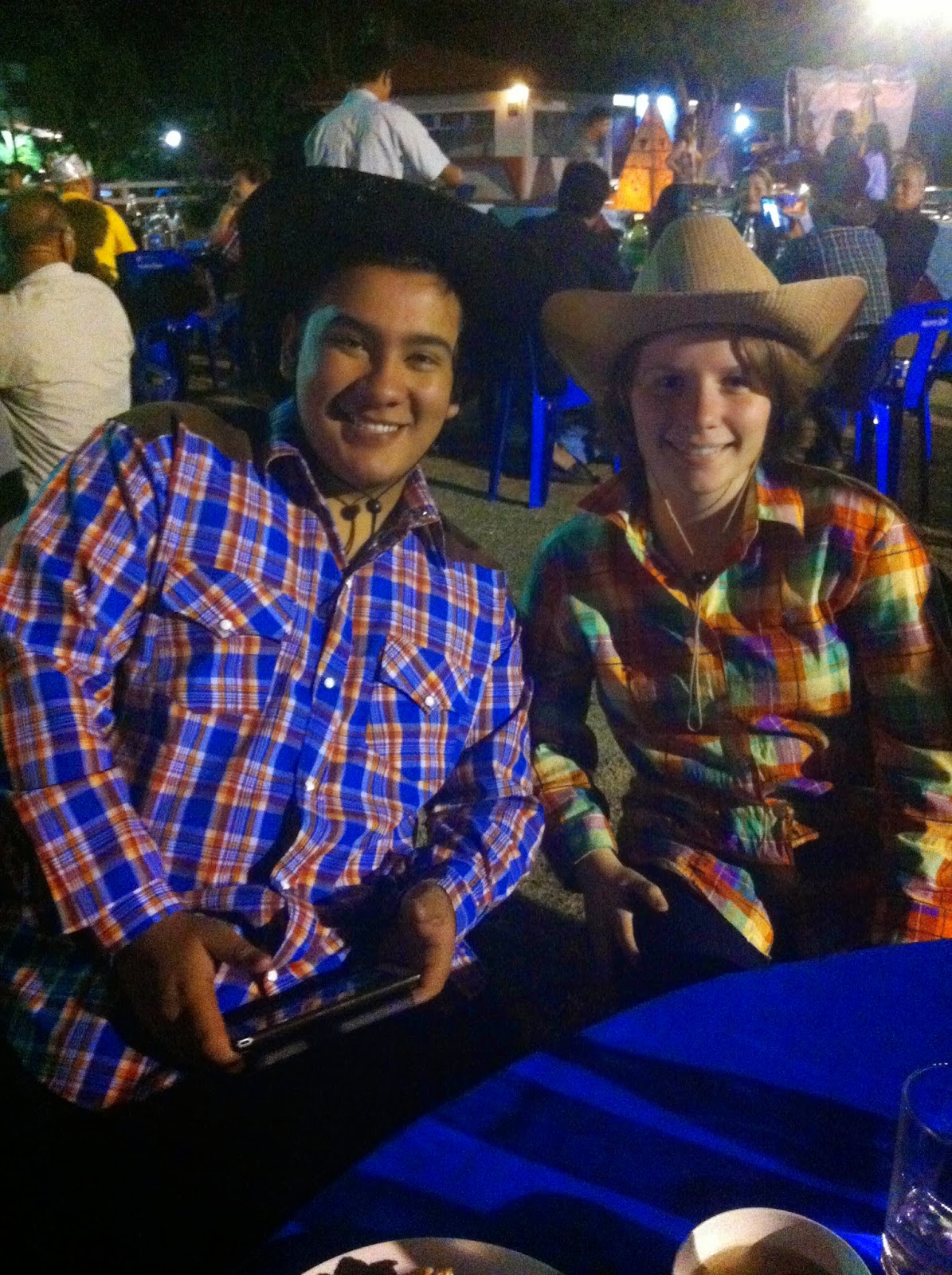 After going to sleep early I had to wake up at 5am! Why? Because this weekend was Rotary Rally! I was still tired but it was pretty fun! We were in teams by car and had to do challenges on the way to Kaoyhai! Once there Diego and I got to go swimming and ride bikes and play with some of the kids! That night we had cowboy nights we got dressed up and went to the hoedown! But it was pretty boring so we went off on our own to just hang. When we got back to the rooms we realized we didn't have to key so we had to wait outside until someone came back!

It was a busy and sleepless week but super fun! And I get the feeling this won't be my last time with little sleep with school ending in three weeks and the rotary trips coming up! Can't wait!!
Posted by Unknown at 4:39 AM